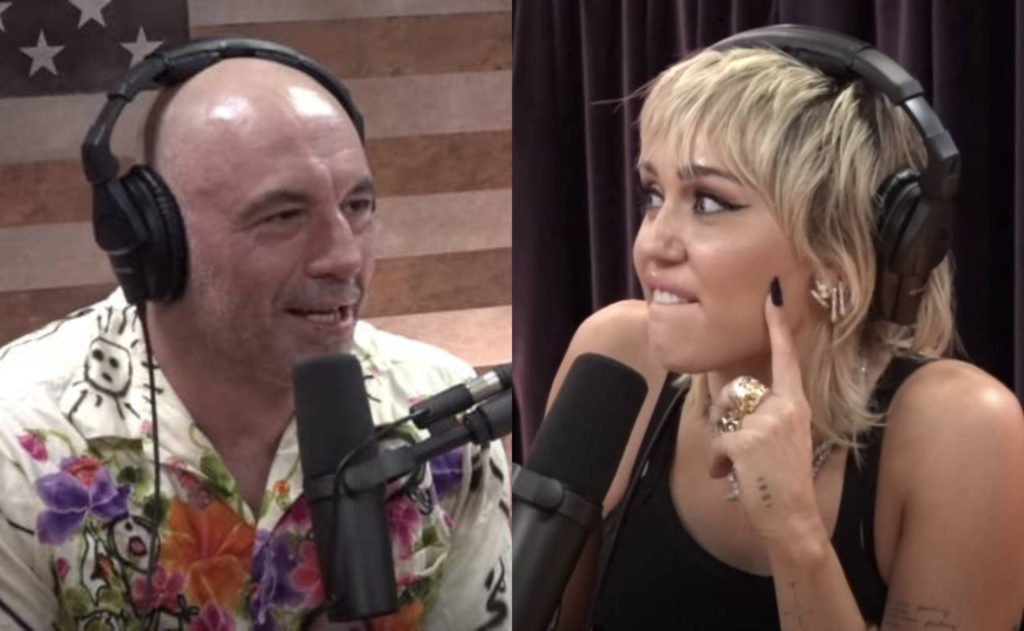 2020 has been the year of the podcaster. With so many people stuck at home and unable to work, countless celebrities & individuals alike have taken to the internet to create podcasts in order to keep their audiences up to date with their lives.

One of the biggest podcasts around is the ‘Joe Rogan Experience’, which will soon be available on Spotify after a deal estimated at over $100 million dollars. On September 10th, 2020, Joe Rogan invited ‘Black Mirror’ actress & singer Miley Cyrus on his show.

The pair began to disguss one of Miley’s favourite shows on tv ‘RuPaul’s Drag Race’. Rogans response to what he was watching (the death drop) was that “it just looks like they’re doing the same thing over and over”. Cyrus then took podcaster Joe Rogan to task over his lack of knowledge of the drag scene and expressing how she thinks his show is just “the same thing over and over, in reponse.

Cyrus isn’t afraid to say what she thinks, and neither is Rogan, so the meeting of the minds was quite epic and fun to listen to. Cyrus is a household name , whether you like her or not. She’s known for her relationship with Liam Hemsworth, her outspokenness, and her wild ways.

Check out the full podcast on Youtube and leave us comments below about how it all went down! 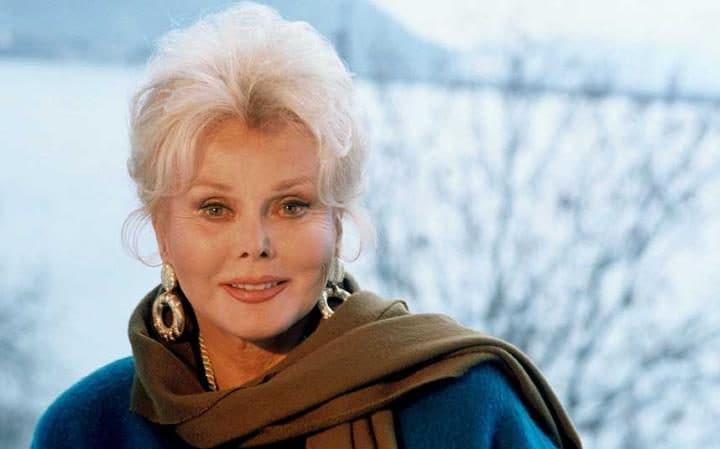 I am a marvellous housekeeper. Every time I leave a man, I keep his houseZsa Zsa Gabor Zsa Zsa Gabor, the actress and iconic Beverley Hills socialite has died from a heart attack agaed 99 at her Los Angeles home, her husband said.

“We tried everything, but her heart just stopped and that was it,” he said. “Even the ambulance tried very hard to get her back, but there was no way,” husband Frederic von Anhalt told The Associated Press.

The Hungarian-born actress appeared in over 70 movies and rose to fame due to her outlandish personality, extravagant lifestyle and extraordinary series of nine marriages.

“Every age has its Madame Pompadour, its Lady Hamilton, its Queen of Sheba, it’s Cleopatra,” George Sanders, the Oscar-winning actor and one of Gabor’s husbands wrote his 1992 autobiography.

“I wouldn’t be surprised if history singles out Zsa Zsa as its 20th century prototype of this exclusive coterie”.

Gabor emigrated to the US with her mother and two sisters Magda and  Eva – both celebrated beauties – at the time of the outbreak of World War Two.

Her more serious acting credits include the 1952 film Moulin Rouge, Lovely to Look At and We’re Not Married.

In 1958, she appeared in Orson Welles’ classic Touch of Evil as well as the campy oddity Queen of Outer Space.

I am a marvellous housekeeper. Every time I leave a man, I keep his houseZsa Zsa Gabor

Thereafter, however, she appeared on the big screen only sporadically. Michael Winner’s 1976  film Won Ton Ton: The Dog Who Saved Hollywood was one, and she did cameos for Nightmare on Elm Street 3 and A Very Brady Sequel.

Always clad in diamonds and furs, the former Miss Hungary took her first husband at the age of 20, and wed for the last time when she was 69-years old.

She became known for her witty quips about her marriages after writing the memoir-cum- rant rant, ‘How to Catch a Man, How to Keep a Man, How to Get Rid of a Man’ in 1970.

A darling of live television entertainment, when she was asked about her housekeeping, she retorted: “I am a marvellous housekeeper. Every time I leave a man, I keep his house.”

She had a penchant for calling everyone “darling.” “I don’t remember anybody’s name,” she once said. “How do you think the ‘dahling’ thing got started?

Her extravagance got her into trouble on occasion and in 1989, she was convicted of slapping a Beverly Hills policeman and sentenced to 72 hours in jail and perform community service. In 2002, she was involved in a serious car accident on Sunset Boulevard as the passenger in a car driven by her hairdresser.

During more recent years,  she often played herself in ironic roles. She appeared in one of David Letterman’s Late Night shows. Accompanying the host to suburban New Jersey, they appeared on doorsteps, with Gabor asking stunned housewives if she could come in and take a look at the shoes in their closets.

She even parlayed her jail term into maintaining a spot in the public eye, appearing in the main title sequence of The Naked Gun 2.

Gabor fell out of bed in 2010 and underwent hip-replacement surgery this summer at in Los Angeles.

Her right leg was amputated above the knee in 2011 to prevent the spread of gangrene, part of a long run of health troubles glamour girl has had since breaking her left hip in a fall.

Following the news which was broken by Ed Lozzi, her long-time publicist, tributes began to pour in. 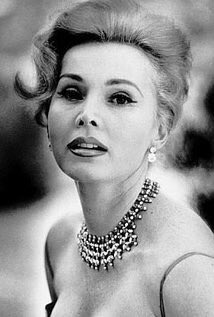 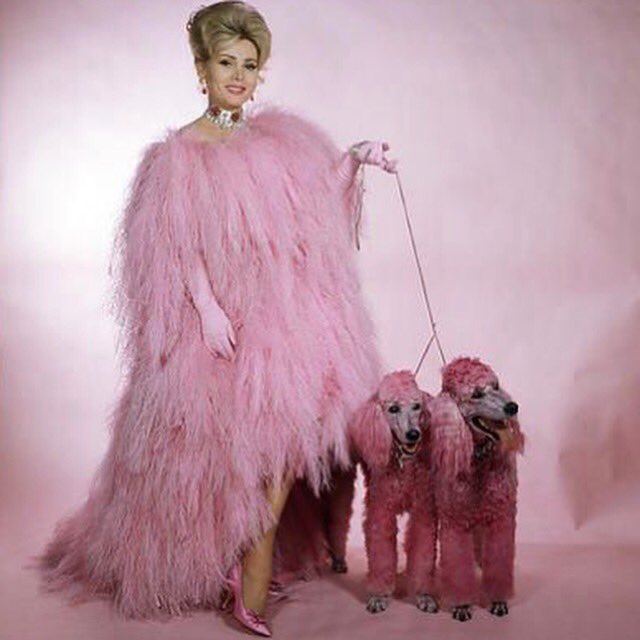 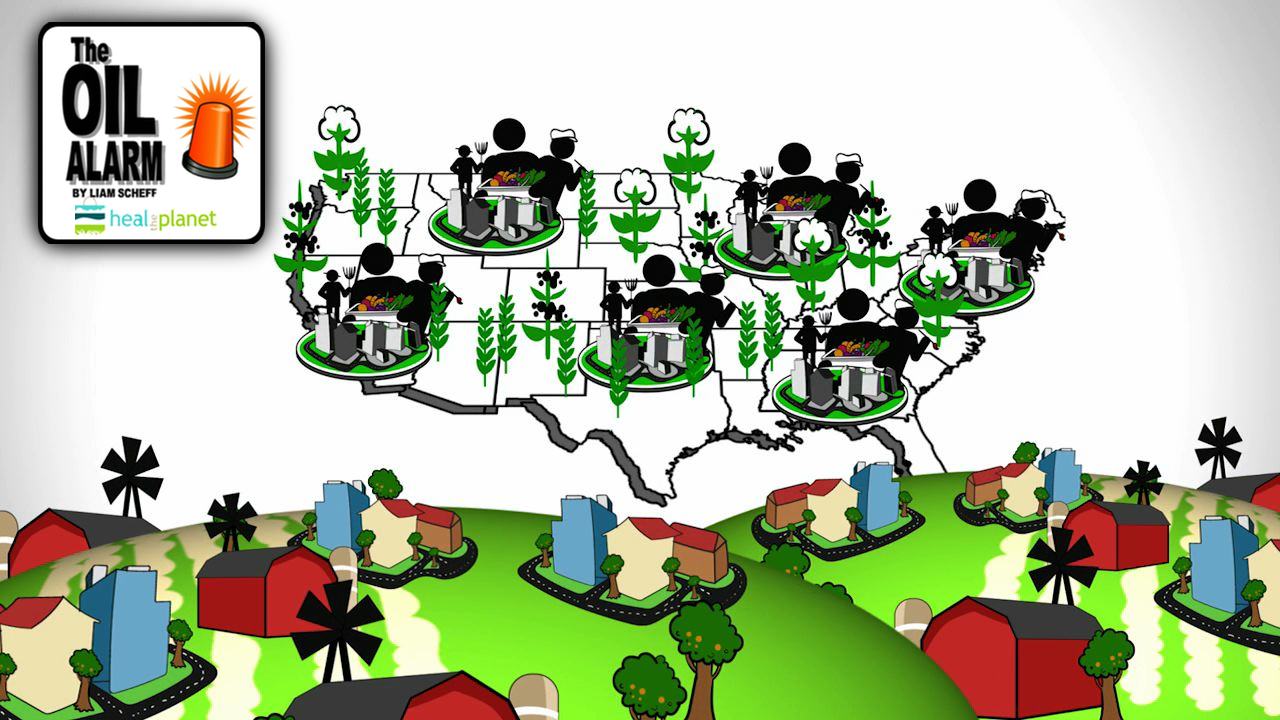 The Oil Alarm, a 17-minute animated film by Liam Scheff, looks at oil’s relationship with our food, as well as our dependence on oil for our food supply. It warns us about how the world we have built, that relies on cheap abundant oil, is in danger of a catastrophic collapse.

The Oil Alarm shows the extent to which food supply in industrialized countries rely on fossil fuels and the development of an inherently unsustainable food system which contributes significantly to global warming. It demonstrates the consumption of finite oil as a cheap and readily available source of energy at all stages of food production, and how the erosion of communities throughout the world, due to industrial agriculture and industrial food supply systems, occur. The extreme fluctuations in the availability of oil and the effect of oil prices on the global food supply systems; significant food shortages and sharp increases in food prices, due to environmental threats and energy scarcity, and danger to food systems by modern, commercial oil-dependent agriculture, is a warning to us all.

The Oil Alarm asks a few pertinent questions: How secure is our food supply? What does crude oil have to do with growing food? What will you do when trucks stop running or when grocery stores go empty? When food runs low — or runs out? How will high gas prices and food shortages affect you?

In The Oil Alarm, Scheff lays out all the details of a coming global collapse stemming from our over-reliance on oil, but more importantly, what we can all do to get ready for it. How do we secure our local food sources, build resilient food networks, and ensure our safety in the upcoming crisis? The key, he says, is to build a society that does not rely on fossil fuels in order to not just survive, but thrive.

“We live at the peak of the petroleum age, digging up every square mile of land for a little more oil. We’re ruining our water, soil, air and land — but we won’t stop. We’ve got a looming nuclear disaster staring at us across the Pacific, but we don’t want to talk about it. And just on the other side of the oil peak, we’re fearing a steep decline in the energy that’s built our society.

“It is not only our birthright — but our responsibility — to grow food where we live. The 21st Century is going to be about relocalizing our food growing, agriculture, and skilled labor — bringing it back to our towns and neighborhoods. We will be changing the way we look at our lawns, green spaces, parks and public spaces. Instead of thinking of lawns and parks as green chemical beds of inbred grass, we will be making them fertile places for food to grow.” 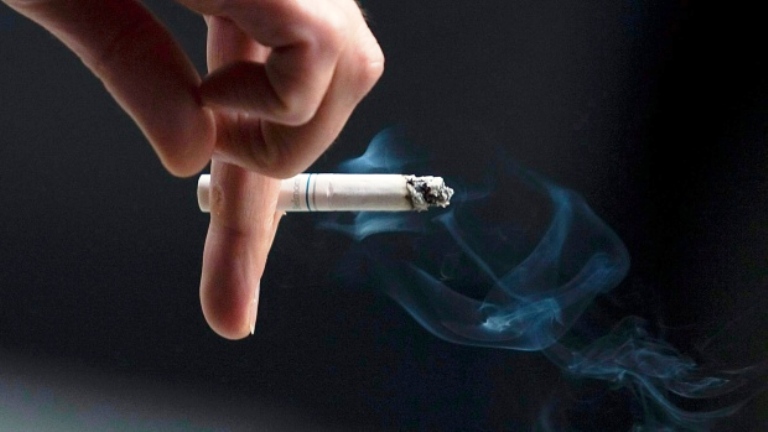 According to a report published by the Centres for Disease Control and Prevention (CDC), since the time they first started keeping records of smokers in the United States, this year’s numbers in the latest census have shown the most significant drop in the number of people smoking cigarettes.

The organisation also says that the drop in the number of people who smoked from 2005 to 2015 has fallen from twenty percent to a staggering fifteen percent. These numbers were not targeted to a specific race or age, with the CDC claiming that the decrease in smoking preferences has been visible across all age groups, races, and in many different parts of the United States.

Eleven years ago, the number of smokers was more than forty-five million. However, when last year’s research was conducted, it showed that numbers had dropped down more than eight percent. The report also suggested that in 2005, more than twenty-four percent of the male population smoked, and according to the latest analysis, the numbers have dropped by nine percent, resulting in only fifteen percent of the male population now smoking.

Furthermore, according to the CDC, smoking was seen more favourable amongst the poor families and neighbourhoods, and the results were different in every state. While the numbers were below fourteen percent for the eastern parts of the United States, the numbers were up in the west. As for the Midwest, there was more than nineteen percent smoking, while the numbers dropped by two percent when compared to the southern parts of the United States.

Dr Brian King, the Deputy Director for Research Translation at the Office on Smoking and Health at the CDC, proudly states that he and his team are happy with the results in reduced smoking, given that it is one of the leading causes of death in the United States. He further added that there’s still more work to be done in this field, saying that one of the other ways to stop people from smoking is to increase the price of the cigarettes and approach media forums for their support in discouraging people to smoke. 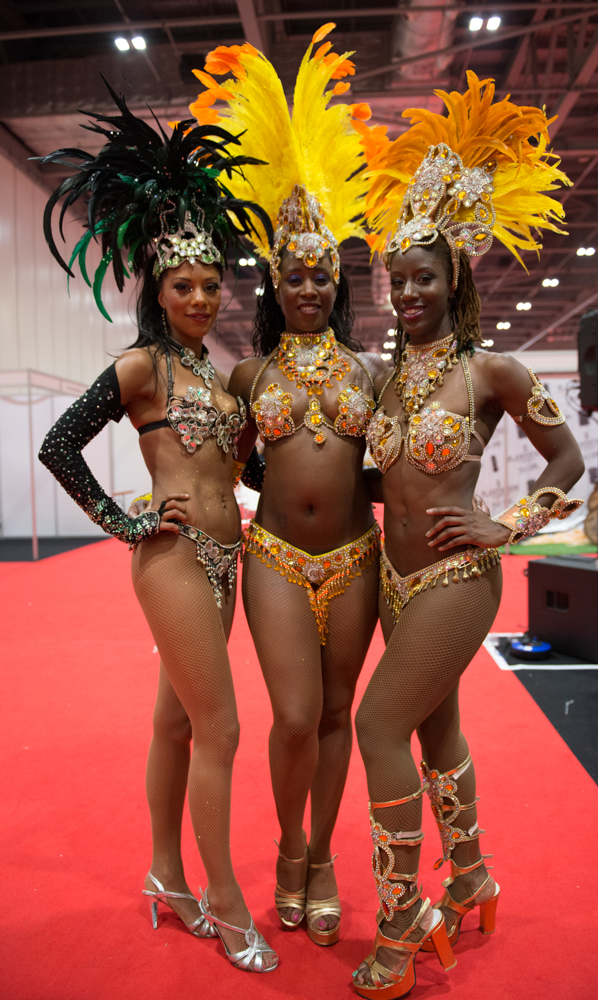 Come check out RumFest this year team V3TV, we will be in the house with host Linda Lambert from Storage Hunters UK, interviewing vendors from around the world, talking to guests and maybe having a sip or two of some of the best rums the world has to offer.

The Rum Experience is a concept created by Global Rum Ambassador and the Founder of The RumFest, Ian Burrell. Celebrating the resurgence of rum and rum culture around the world, The Rum Experience takes a contemporary approach to promoting the rum and sugarcane industries and Caribbean culture through a series of unique events, festival, rum tastings, pop-up experiences, food pairings and rum battles. With the arrival of National Rum Day today, RumFest announces its return to the capital for the nation’s biggest of rum and rum culture. Pulling out all the stops for an impressive 10th anniversary year, the event will host a myriad of rum-related offerings with the spirit’s leading brands and aficionados all jam-packed into two days at London’s ILEC, 22nd-23rd October. Over 400 rums will be available for ticket-holders to sip, savour and buy try and take home with RumFest’s Golden Tot tokens making a welcome return to give the more discerning drinker access to ultra-premium and rare rums, that would otherwise cost over £200 a bottle. The comprehensive programme will see rum tastings, in-depth seminars, The Rum Auction sponsored by Christie’s, incredible food and a party atmosphere to match, not to mention a new Sunday rum roast and special guests Levi Roots and Beach Bum Berry joining in on the celebrations. Tickets are now on sale from £39.50, including a VIP package priced from £69.50 which includes fast track entry, goodie bag and a three course Caribbean lunch. More information on tickets and the event can be found on the website via rumfest.co.uk. 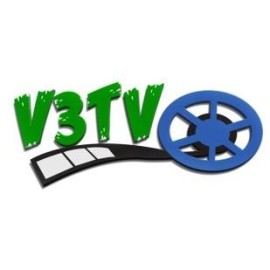 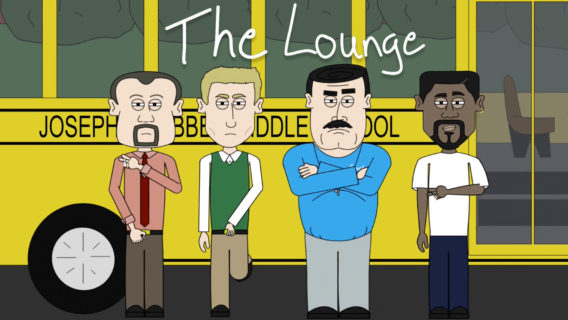 The Lounge – Look on the Bright Side (STCS e09)