So Jeffery Epstein’s pimp is now in custody, what happens next?

Will she make it out alive and be taken to trial, or will she meet a similar fate to her former partner?

Ghislaine Maxwell is a British socialite and the youngest child of disgraced publishing tycoon Robert Maxwell. She moved to the United States after her father’s death in 1991 and became a close associate of financier and subsequently convicted sex offender Jeffrey Epstein. Maxwell has faced persistent allegations of procuring and sexually trafficking underage girls for Epstein and others, charges she emphatically denies.

Maxwell founded the self-described ocean-advocacy group The TerraMar Project in 2012. The organization announced the cessation of operations on 12 July 2019, a week after the sex trafficking charges brought by New York federal prosecutors against Epstein became public.[5]

The US Virgin Islands Department of Justice announced on 10 July 2020 that Maxwell was also under investigation in the Caribbean territory.

Accounts differ on when Maxwell first met American financier Jeffrey Epstein. According to Epstein’s former business partner, Steven Hoffenberg, Robert Maxwell introduced his daughter to Epstein in the late 1980s.[39] The Times reported that Maxwell met Epstein in the early 1990s at a New York party following “a difficult break-up with Count Gianfranco Cicogna Mozzoni” (1962–2012) of the CIGA Hotels clan.[40]

Maxwell had a romantic relationship with Epstein for several years in the early 1990s and remained closely associated with him for decades.[12][38][41] The nature of their relationship remains unclear. In a 2009 deposition, several of Epstein’s household employees testified that Epstein referred to her as his “main girlfriend” who also hired, fired, and supervised his staff, starting around 1992.[42] She has also been referred to as the “Lady of the House” by Epstein’s staff and as his “aggressive assistant”.[43] In a 2003 Vanity Fair profile on Epstein, author Vicky Ward said Epstein referred to Maxwell as “my best friend”.[44] Ward also observed that Maxwell seemed “to organize much of his life”.[44] 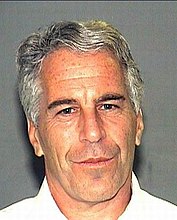 Maxwell is known for her longstanding friendship[46] with Prince Andrew, Duke of York, and for having escorted him to a “hookers and pimps” social function in New York.[47] She introduced Epstein to Prince Andrew, and the three often socialised together.

In 2000, Maxwell and Epstein attended a party thrown by Prince Andrew at the Queen’s Sandringham House estate in Norfolk, England, reportedly for Maxwell’s 39th birthday.[49] In a November 2019 interview with the BBC, Prince Andrew confirmed that Maxwell and Epstein had attended an event at his invitation, but he denied that it was anything more than a “straightforward shooting weekend”.[50]

Also, what does it mean when you’re waterboarding your partner with prosecco?

J-Rye Rye tells us what to expect when dating her friends.